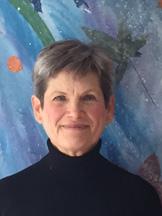 Lynda Goldberg's monotypes are one-of-a kind works on paper.  She starts with an idea or feeling which she expresses in textures and colors using natural and manmade objects. Lynda sees an item's potential by how it might appear after color and pressure have been applied.  While the monotypes are a statement of Lynda's personal expressions, the audience may use its own imagination and make its own meaning.

Lynda has exhibited in New England in both solo and group shows. She has received numerous awards. Her work is in many corporate, private and non-profit collections in the U.S. and abroad.