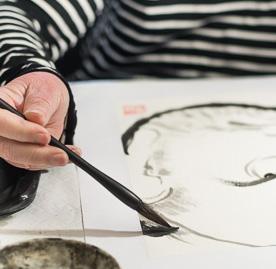 I began studying sumi-ink brush painting while living in Japan, studying with a sumi master for 2 years. On my return to the United States, I earned a Ph.D. in interdisciplinary social science and continued my exploration  of brush painting as both an art form and a cultural meaning system. In the Boston area I continued my painting studies:  Japanese calligraphy (Judith Liniado), Japanese brush painting (Jan Zaremba), and classical Chinese landscape painting (Ma Qingxiong).

Originally I was drawn to the Japanese aesthetic of deceptive simplicity and restrained expressiveness.  I have interpreted this understanding by creating my own versions of familiar imagery such as bamboo, plum blossom, Buddhist figures, etc. Over the last few years I have  combined historic Japanese and Chinese painting styles with ideas from Western art history.  By fusing Eastern and Western artistic and cultural sensibilities, I re-interpret traditional symbols and styles. Exploring and expanding the inherent qualities of sumi-ink, rice paper and Asian brushes, mediated by discipline-based painting skills, I express my unique vision of  serenity and authenticity.

Copyright © 2013 by ArtSpecifier, All Rights Reserved Artworks shown on this website are copyrighted by the artists unless otherwise noted and may not be reproduced without permission of the copyright holder.
Powered by Bondware
News Publishing Software