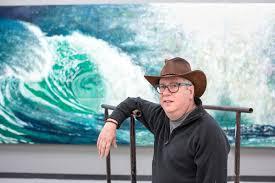 “They are beasts, but they are directly attached to a blueprint of our own existence.” Ray Smith

Painter and sculptor Ray Smith was born in Brownsville, Texas in 1959, on land that his family settled in the early 19th century. He studied fresco painting with traditional craftsmen in Mexico, attended art school in Mexico and the United States, and lived in Mexico City. Since 1985, he has been based in New York and Cuernavaca, Mexico.

Smith’s art is characterized by a kind of magical realism. He bends twists and transplants, creating often-illogical scenarios that are full of surprises, cross-cultural references and unlikely juxtapositions.

Smith’s series, Harajuku and Ungernica II, are large drawings and paintings inspired by a Surrealist technique that explores the mystique of accident by using a collective collage of words or images called the cadavre exquis (exquisite corpse).