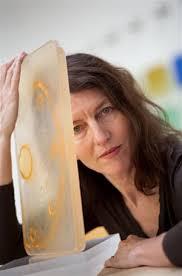 “The (Nashville) Music City Center is proud to be the home of over 100 pieces of public art. During the master planning process, the Convention Center Authority budgeted $2 million for art in the new convention center. Carrie McGee is a featured artist.”

Carrie McGee’s mixed media constructions explore variation within repeated forms. Utilizing transparent plastics as a ground, she experiments with natural and chemical processes, such as rust and oxidation, to create luminous works that emanate a meditative pulse.

Initially experienced as playful experimentation, this work has became the central focus of McGee’s efforts, evolving from ephemeral to lasting and often architectural in scope and intent.

McGee has lived in many parts of the United States. Born in Cincinnati, Ohio she migrated to Los Angeles, New York, and finally settled in Nashville, TN.

Her paintings and constructions have been exhibited regularly for over twenty years and she has received major artistic commissions from libraries, airports, banks and other public venues.