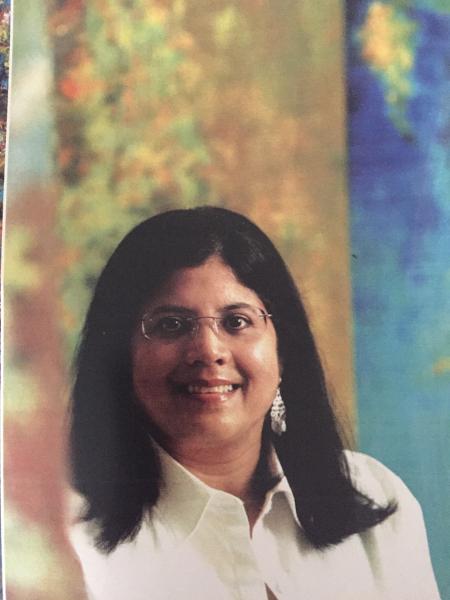 Vero Beach, Florida
Chitra Ramanathan's career emerged on Broadway, New York's SoHo art gallery district in 1995 with solo and group exhibits, noticed by critics for the unique style influenced by her roots in India. Since then, her work has been exhibited as a retrospective solo exhibit at the Indianapolis ArtsGarden in 2006, a solo at Butler University, 2007 and Pike Performing Arts the same year, Chase Towers, Monument Circle in Indianapolis. Other venues include exhibits in different states within the US and Summer Exhibition at the Royal Academy of Arts, London. Permanent public exhibits include a pair of large-scale works acquired by the College of Medicine, University of Illinois installed in 1996.
A pair of large acrylics and mixed media paintings signed by the artist are permanently displayed inside the Bellagio Conservatory at the Bellagio Hotel, Las Vegas since 2004, commissioned by MGM Resorts International/MGM Mirage. Other site-specific public art commissions include a 13.8 ft. wide mural created at Crooked Creek Elementary School at Indianapolis in 2008, a series of large paintings created and displayed in downtown Indianapolis by the the Indianapolis Arts Council in 2006-2007, etc.
Chitra received her Bachelors degree in Painting with honors in 1993, and M.B.A in Human Resources and Art Museum Administration in 1997 from the University of Illinois at Urbana-Champaign. During her student years she studied French Art History and studio art in Paris, with extended visits to Claude Monet's Garden in Giverny, France as sources that draw influence on her work. Professional Artist Residencies include the Camac Centre D'Art at Marnay sur Seine, France in 2010 and Scuola Internazionale di Grafica at Venice, Italy in 2012.
Chitra Ramanathan's frequently large-scale paintings are characterized by intricately interwoven textures, expressive brushwork and a distinct array of colors that aim to capture the fleeting moment. The prime media is acrylic or acrylics combined with mixed-media as with different originals. Her working process evolves continually with each developing piece being infused with newly discovered art materials and cutting-edge techniques learned through educational avenues such as serving as a committee member of the College Art Association, New York for several years, and completed professional artist Residencies. Many of her large as well as smaller works have been acquired by both individual collectors and businesses around the United States and abroad.

In 2005, Chitra Ramanathan was invited to the Royal Academy of Arts, London, U.K as Visitor Artist for a visual presentation and talk featuring her ongoing body of work and where she conducted "student tutorials' at the Royal Academy Schools.

Her paintings and profile have been featured in magazine and book publications including Who’s Who in America, AskArt.com, the Internet Movie Database (IMDB), International Contemporary Artists, Vol 1. available on Amazon.com, the Indianapolis Business Journal, Luxury Real Estate Magazine and others.